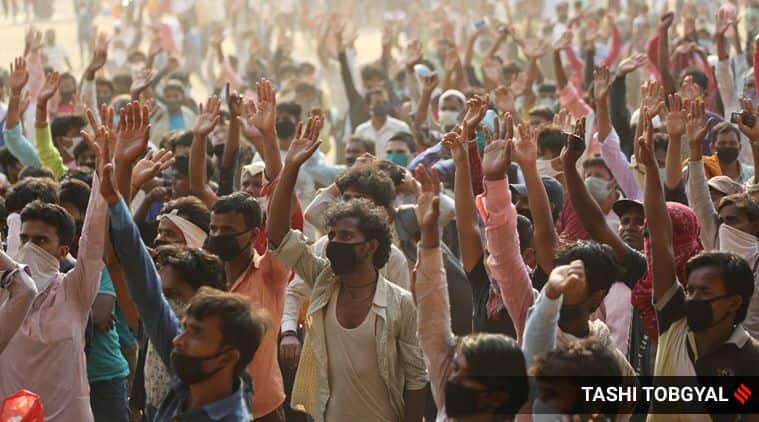 Migrants at the Ghaziabad border

“Experts” like me tend to use a crisis to push the theory they developed during their doctoral research as inevitable change. It’s never really like that. Change is gradual. Its origin is in the present. Some innovations are already there and get accelerated. Others make a beginning given the new requirements. Everything doesn’t change. Many people and their lives continue as before. A little humility won’t hurt us.

NGOs and other agencies have often stressed that health is a community issue and preventive measures are more efficient than curative medicine. So, we will get back to these models to fight the pandemic on a more enduring basis. We will make some progress and draw up plans, but it would be wrong to think that such thinking will dominate the discourse on healthcare. Big corporations know that there is big money in curative medicine and health — second only to food.

Opinion | How COVID-19 is amplifying gender inequality in India

We will need to work from “home”. The neo-Fordist world and the decline of factory mass production were “discovered” in the Eighties of the last century, by my friend, Michael Piore, a professor at MIT, who with O Sable, wrote the classic, The Second Industrial Divide. The book described the new world as one with globalising communities working from home, using decentralised technologies, new materials and modern methods of communication. Separately, Harvard’s Keynesian economist, Alvin Hansen, was showing that there was indeed a historical transformation underway. Fewer people were producing more. The rest of the workers would be absorbed in health, education and entertainment. But the Piore-Sabel argument was different. It was based on changes taking place in Emiglia Romana (Italy). Cottages were developing fashion garments in perimeters of around 15 square miles and they were competing with French designers. I was piqued at a recent typical Italian posting that if you are going to die, do so with ventilators made by Ferrari, face masks and corona suits made by Versace, Armani or other great fashion designers from Italy. In this country, we did diamond polishing on the same model but now harass the workers when they want to go home. We have the history, the artisanal skills and the system designers for more of working from home. Those who think that such work happens only in diamond polishing units, must go see garment factories, energy-efficient “furnaces” and the works. In the best-case scenario, the redevelopment of cities will involve mohallas for such work in friendly, healthy environments.

Let’s not kid ourselves about this idyllic Gandhian world. The Big Man will be just a step behind as he is today. The Chomsky of the future will be needed to keep critiquing them and s(he) will be there. The Big Man will develop the communication technology, the materials, the systems to make all this happen. At the same time, his critics will also thrive. As the vaccine arrives, the virus will just be a shadow and populations will expand. We will increasingly live in what I called the rural-urban continuum we discovered and developed in the last two decades. However, in technology centres, the urban space will keep growing.

Opinion | We have to put India, and humanity, before everything else in war against hatred

Will we in India feed her and then send her to college? For then, her first child will come later and the last child earlier and she will hold up half the sky, in working both at home and in the think tanks of the Big Man and big government. It won’t happen that easily for the mindset which can’t see the virus as a biological phenomenon, but brings in religion as a cause at the drop of a hat; the mindset will not change that easily when it comes to women’s education.

That shows you how little has changed and I have failed as a teacher. Things will improve, but not in the way the pundits claim. I will be there in this column even then. What will I (we) say? “The answer my friend”, as Joan Baez sang in my college days half a century or more ago, “is blowing in the wind”.

This article first appeared in the print edition on May 20, 2020 under the title ‘The pains of a new world’.

The writer, a former Union minister, is an economist

Opinion | In a democracy that aspires to build free market economy, all govt needs to do is get out of the way One Nation, One Ration Card can provide social protection backbone to migrants