A furious Iran threatened to avenge a U.S. strike that killed a top Iranian commander at Baghdad’s international airport on Friday, raising fears of a wider regional conflict between the arch-foes.

The Pentagon said U.S. President Donald Trump had ordered Qasem Soleimani’s “killing” after a pro-Iran mob this week laid siege to the U.S. Embassy in the Iraqi capital.

Iran’s supreme leader Ayatollah Ali Khamenei promised “severe revenge” for Soleimani’s death, the biggest escalation yet in a feared proxy war between Iran and the U.S. on Iraqi soil.

Angry Iranians took to the streets of Tehran chanting “Death to America” and holding up posters of Soleimani, who was widely admired in the Islamic Republic. 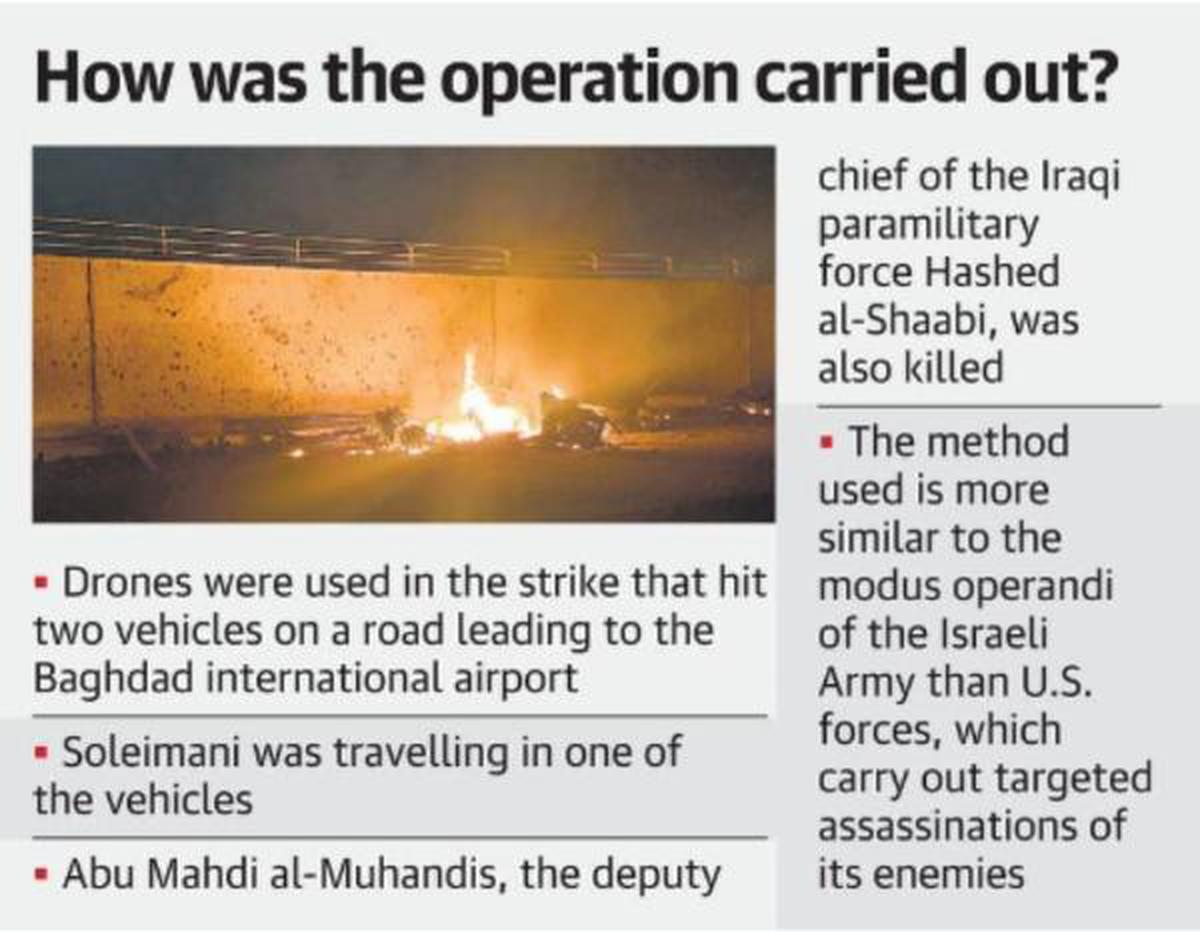 Mr. Trump tweeted a picture of an American flag with no comment, then followed up by declaring Soleimani should have been killed “many years ago”.

U.S. Secretary of State Mike Pompeo said Soleimani had been planning an “imminent” attack “that would have put dozens if not hundreds of American lives at risk”.

Early on Friday, a precision drone strike struck two cars belonging to Iraq’s Hashed al-Shaabi, a paramilitary force with close ties to Iran, as they drove away from Baghdad International Airport.

Soleimani also served as Iran’s pointman on Iraq, visiting the country in times of turmoil.

Muhandis was the Hashed’s deputy chief, but was widely recognised as the real shot-caller within the group. A replacement for him has not yet been named. Both were under U.S. sanctions.

Ceremonies to mourn them will be held on Saturday, when Iraq’s Parliament is also set to hold an emergency meeting.

A leading Hashed member, Hadi al-Ameri, urged lawmakers “to take a bold decision to oust foreign troops from Iraq, because their presence has become a threat for Iraqis”.

Some 5,200 U.S. troops are stationed across the country, and a U.S. defence official told AFP that some additional forces had arrived in recent hours to boost security at the American Embassy.

Iraqi Prime Minister Adel Abdel Mahdi said the strike was a “flagrant violation” of a security accord with the U.S., warning it would “spark a devastating war in Iraq”.

Meanwhile, Mr. Khamenei has named Esmail Qaani, the deputy head of the Revolutionary Guards’ foreign operations arm, as the successor to Soleimani. But paramilitary figures in Iraq including U.S.-blacklisted Qais al-Khazali and militiaman-turned-politician Moqtada Sadr called on their fighters to “be ready”.

And in Lebanon, the leader of the Tehran-backed Hezbollah, Hassan Nasrallah, warned of “punishment for these criminal assassins”, although the Shia movement denied any of its commanders were killed.

As fears of a regional conflagration grew, Yemen’s pro-Tehran Huthi rebels – who have launched a string of missile attacks on Iran’s regional rival Saudi Arabia – called for “swift reprisals”.

You have reached your limit for free articles this month.

Register to The Hindu for free and get unlimited access for 30 days.

Find mobile-friendly version of articles from the day’s newspaper in one easy-to-read list.

Enjoy reading as many articles as you wish without any limitations.

A select list of articles that match your interests and tastes.

Move smoothly between articles as our pages load instantly.

A one-stop-shop for seeing the latest updates, and managing your preferences.

We brief you on the latest and most important developments, three times a day.

Not convinced? Know why you should pay for news.

*Our Digital Subscription plans do not currently include the e-paper ,crossword, iPhone, iPad mobile applications and print. Our plans enhance your reading experience.