After hunkering down for three months, the major football leagues around Europe have emerged blinking into the sunlight, rubbing the sleep out of their eyes to find that everyone’s disappeared. The stadiums are empty, but we, outside Europe, watch the games as we always did-on TV, knowing that we’re both part of the problem and the solution.

The marketing behemoth of European football is the English Premier League, which returned on June 17 and will be showing a game every single day for several weeks. The Premier League commands the biggest global TV audiences and its teams are supported, often fanatically, from as far afield as Lagos and Bengaluru, Bangkok and Riyadh. Only Real Madrid and Barcelona, in Spain, enjoy the global fame of even teams such as Arsenal, Chelsea and Tottenham Hotspur, let alone Manchester United or Liverpool. The latter are champions-elect, going into the coronavirus-induced hiatus an unprecedented 25 points clear of Manchester City and requiring only two wins from their remaining nine matches to seal the title. Indeed, by the time you read this, Liverpool may already be English champions for the first time in 30 years.

Liverpool returned to the new crowd-free football an uncertain, appropriately-muted version of themselves, unable to feed off the energy, aggression and keening hope of their famously impassioned supporters. Football without the crowd can be just as absorbing, the players just as skilled, and speedy, but it all seems divorced of meaning. It’s a dystopia dreamed up by television executives and club chairmen-a game without unruly, unbiddable local fans that is followed by people around the world willingly stumping up cash to be entertained from the safety of their armchairs. Was there anything sadder than the sight, during the broadcasts of Premier League matches, of all those fans rising off their sofas when their team scored, fists clenched, teeth bared, casting desperately around for someone to hug in a homebound simulation of communal ecstasy, of shared joy? Still, the games must go on. Calls for the season to be scrapped were always bizarre. Why should the efforts of players go to vain when playing in closed stadiums was an option? Besides, there is still no clarity on when crowds in close proximity will be able to return, not just to the stadiums themselves, but (in England, particularly) in the narrow streets and pubs around the grounds where thousands coalesce before and after matches. When will thousands of fans be permitted to follow their teams across national and international boundaries? 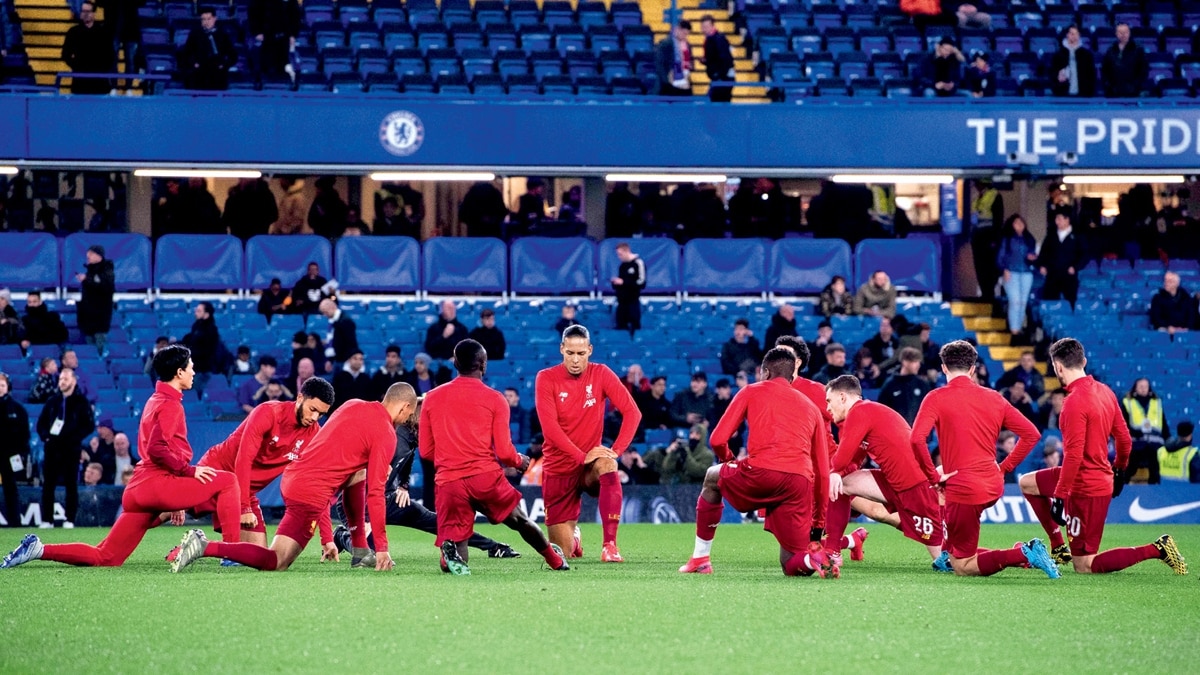 The absence of fans at the ground, though, has robbed football of its human spectacle. Without emotion coursing through the people at the game, the people who have supported their clubs for decades, for whom football is not entertainment but an expression of community, the game can seem an arid, technical exercise, absorbing perhaps, but empty. But the suits know we won’t turn off the TV. They’re even giving us ersatz crowd sounds, piped into the coverage as if it’s only the noise that matters, not the meaning of the noise. Fans, it appears, only matter as bodies, as background pageantry. And if the tourists in stadiums aren’t making enough noise, when crowds are eventually allowed back, let’s just pipe in fake cheering, fake happiness, fake anger. The new normal (that dreaded phrase), has accelerated our progress towards the inevitable destination of televised sport at the highest level-‘fans’ pretending we’re all in it together though we are, in reality, alone, consuming yet another product delivered to us in our now hermetically-sealed capsules, shunning human contact even as we crave it.

Some of the goals were brilliant though and, no doubt, there will be more. Much more.

Get real-time alerts and all the news on your phone with the all-new India Today app. Download from

A case of judicial law making