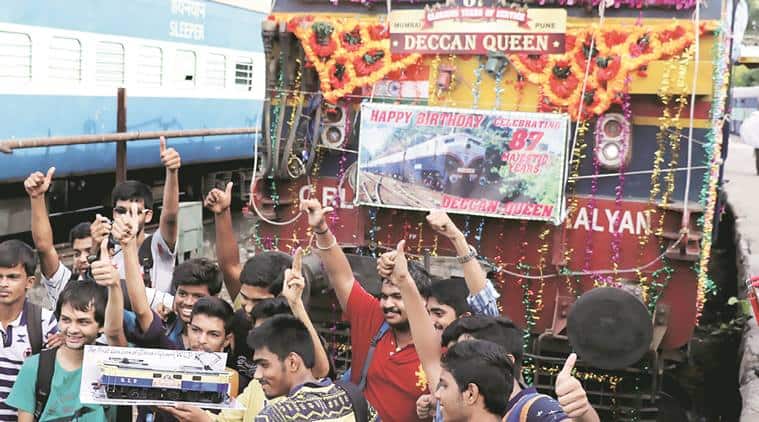 This year, subdued birthday celebrations were held by Railway Pravasi Group’s Harsha Shah and some other fans of the train in Pune. (Representational)

Deccan Queen’s 90th birthday was celebrated in absentia in Pune by the train’s ‘fans’ and commuters, even as the train remained stranded in Mumbai as regular train services have been halted for months due to the lockdown.

The commuters who use the service to travel between Pune and Mumbai celebrate the train’s birthday on June 1 every year at Pune railway station. This year, subdued birthday celebrations were held by Railway Pravasi Group’s Harsha Shah and some other fans of the train in Pune.

“I have celebrated Deccan Queen’s birthday since I was five years old. This is the 66th year of the birthday celebration and it’s also the first time that the train is not present for the function,” said Shah, who speaks of the Deccan Queen fondly, like a family member. Despite the train’s absence from the city, two cakes were cut, one at Ganpati Chowk on Laxmi Road, and another at platform no. 1 of Pune railway station, in front of a painting of the Deccan Queen.

Recently, Central Railway had decided to give the train a makeover by upgrading its coaches to German-made LHB coaches, which have better safety features, better suspension system and better riding comfort.

When the service started in 1930, the train was introduced with two rakes of seven coaches each, one of which was painted in silver with scarlet mouldings, and the other with royal blue with gold lines. It now runs with 17 coaches and following the latest upgrade, the number of coaches will go up to 20.

PM Modi to Hold Fresh Round of Consultations with Chief Ministers Next Week, Discuss Unlock 1.0