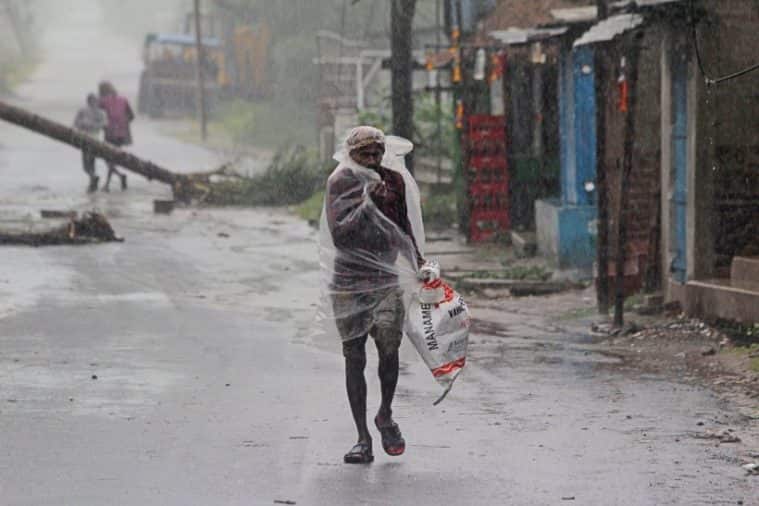 A man covers himself with a plastic sheet and walks in the rain ahead of Cyclone Amphan landfall at Bhadrak district in Odisha. (AP)

With West Bengal in the eye of Amphan, Odisha is assessing the damage caused by the cyclone, which has impacted its coastal districts.

However, officials say, the worst is now over for the state as Amphan has made landfall in neighbouring West Bengal. There were turbulent conditions on Wednesday for about seven hours, and the “damage has not been too bad”, an official said.

On reports of the death of a person due to the cyclone, the official said that there were “contradictory versions”, and that an official confirmation will be available on Thursday.

Pradip Jena, Special Relief Commissioner, told The Indian Express: “Lots of trees have been uprooted. That assessment is continuing and will take time. There has been some damage to electrical infrastructure. By tomorrow, we will come out with the final assessment. There has been some agricultural damage as well. Fifty to 60 thousand hectares of paddy, and 30 to 40 thousand hectares of other crops. There has been the allegation of one death, but there are contradictory views that are coming in. We have sent (the body) for post mortem, and after that we can say officially.”

A press release from the Special Relief Commissioner’s Office in the evening said that post-disaster road clearance had started in Kendrapara, Jagatsinghpur, Bhadrak and other areas by the National Disaster Response Force, Odisha Disaster Rapid Action Force and ODRAF Fire Service.

“As per the preliminary report received from the Department of Energy, 65 numbers of 33 KV Feeders have been affected and (around 19 lakh) consumers have been affected in Balasore, Bhadrak, Jajapur, Mayurbhanj, Jagatsinghpur and Ganjam Districts..it is observed that about 90 % of the telecom towers/ infrastructure are intact and only shifting of antenna is observed in the affected districts. Telecom Service Providers have started working in areas where cyclone has subsided for restoration of the damaged equipment,” the release said.

China Deploying Large Contingent Of Troops Along LAC In Ladakh Since Early May: MEA